March 14, 2021
From SYFY Wire:
In central Hungary lies a village named Nagyrév. A farming town to the southeast of Budapest with a sparse location of around 800 people, Nagyrév was, like many small villages in the country during the early 1900s, a quiet and unobtrusive place. Its community was tightly bound and its amenities simple. What it lacked, however, was a resident doctor. For those who were sick or in desperate need of medical advice, their options were limited. That changed in 1911 when a woman named Zsuzsanna Fazekas came to town. Within 15 years, she would become one of Europe's most infamous woman, the self-styled leader of a group of women who were accused of murdering close to three hundred people by poisoning. They became known as The Angel Makers of Nagyrév.
When she arrived in Nagyrév, Zsuzsanna Fazekas raised a few eyebrows. She had a murky background, her husband had apparently gone missing under curious circumstances, and nobody knew where she had come from. She did, however, come with some solid references and prior experience as a midwife. 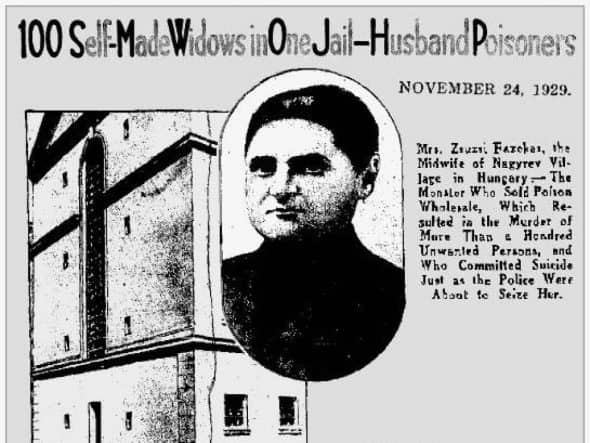 It's unclear how the so-called Angel Makers were eventually detected. One account claim that a medical student in a neighboring town found high arsenic levels in a body that washed up on the riverbank, leading to an investigation. Béla Bodó, a Hungarian-American historian, said that the murders were made public when an anonymous letter to a local newspaper accused the women of mass murder. Whatever the case, the authorities were driven to exhume dozens of bodies from the local cemetery, and they discovered that 46 of the 50 corpses dug up contained massive traces of arsenic.
When the police came to arrest Fazekas, she was already dead, having taken some of her own poison. 26 women eventually stood trial for the murders. Their motives were varied, and their crimes became the stuff of local myth. Some women claimed they were sick of their abusive spouses. Others wanted to get their hands on land owned by their families. Many said they had wanted to keep their lovers from wartime. It was remarked upon with shock at the time that these women often seemed unrepentant on the stand, even bored by the drama of the courtroom. They felt that they had done what they had to do, regardless of the monstrous nature of their misdeeds. Eventually, eight of the Angel Makers of Nagyrév were sentenced to death but only two were executed. 12 others received prison sentences.
read more here @ SYFY Wire
see also: The Angel Makers by Jessica Gregson