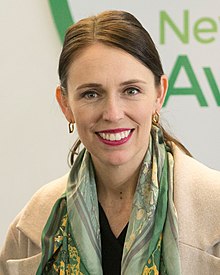 New Zealand Prime Minister Jacinda Ardern has won a landslide victory in the country's general election.
With all votes tallied, Ms Ardern's centre-left Labour Party won 49.1%, bringing a projected 64 seats and a rare outright parliamentary majority.
The opposition centre-right National Party won 26.8% in Saturday's poll - just 35 seats in the 120-seat assembly.
The poll was originally to be held in September but was postponed by a month after a renewed Covid-19 outbreak.
Ms Ardern, 40, told her supporters after the victory: "New Zealand has shown the Labour Party its greatest support in almost 50 years. We will not take your support for granted. And I can promise you we will be a party that governs for every New Zealander."
read more here @ BBC News