A body fully dressed with jewelry excavated in Gyeongju

September 03, 2020
From The DONG-A ILBO:
A full set of accessories have been unearthed, which are presumed to belong to a women of the highest status during the Silla Dynasty in the first half of the sixth century. This is the first case where the dead of the tomb has been found wearing accessories from head to toe. 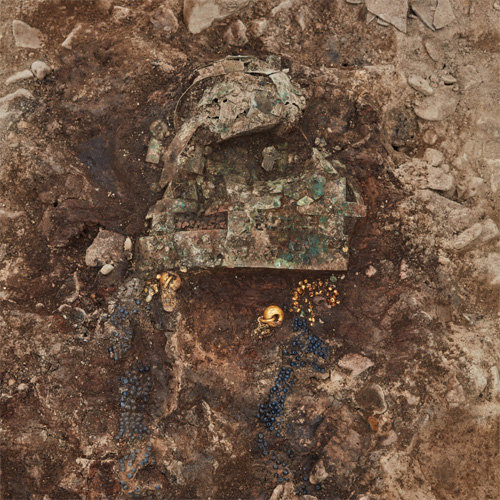 The Cultural Heritage Administration announced Thursday that a precision excavation into the ancient tomb No. 120-2 of Hwangnam-dong, Gyeongju City, has found a number of jewelry items including a gilt-bronze crown, gold earrings, silver bracelets, a silver belt, and gilt-bronze shoes.
The gilt-bronze crown has a round frame (that fits into the head) at the bottom, with three pieces of twigs-shaped ornaments and two pieces of deer-horn ornaments attached on the top. The crown was fold flat and discovered covering the face of the dead, instead of the head. Experts say that this rare case of excavation is intended to cover up the face of the dead as courtesy.
Silver rings have been found as well, five from the right hand and one from the left. “The left hand has not been exposed entirely, so more rings could show up,” explained an official from the administration. “It is possible that the dead might be wearing rings in every finger, just like the buried of the ancient tomb of Cheonmachong.”
read more here @ The DONG-A ILBO