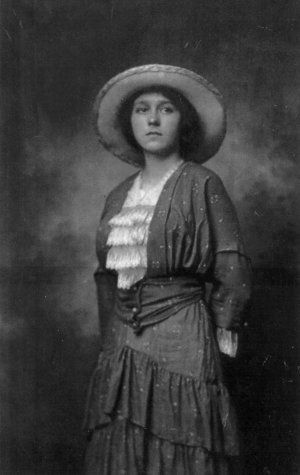 By Jess Montgomery for CrimeReads:

In real life, Maude’s husband Vinton County (Ohio) Sheriff Fletcher Collins was killed in the line of duty in October 1925. But there was no mystery as to who killed him. Internet stories vary, but per a newspaper account of the day, Fletcher had ventured out with a warrant for Amy Robinette, on a charge of stealing automobile tires, and another for George Steele for speeding. He found the two together alongside the road. Sadly, George pulled out a 12-gauge shotgun and shot Fletcher at close range. The couple ran but turned themselves in an hour later. There were also several witnesses to the murder, and Maude had to serve as witness in the trial that she had knowledge of the warrants. (The couple took them before running.)
After the funeral, Maude was packing up her five children to return home to West Virginia. (Interesting side note: she was a direct descendant of the McCoy clan—as in the Hatfield and McCoy feud of fame.) But a county commissioner came by, asked her where she was going, and invited her to serve out her husband’s term. She did, and in 1926 ran for sheriff in her own right. She ran on the Democratic ticket, beating men in both the primary and general elections, and won… in a landslide.
read more @ CrimeReads