Showing posts from January, 2020
Show all

Why Caste Matters In Sexual Assault

The Logical Indian :  A 19-year-old Dalit woman who had gone missing on December 31, was found hanging from a tree in Modasa, Gujarat on Sunday, January 5. The victim’s family has accused four men of gang-rape and murder.... A caste society is inherently violent in nature, and when it comes to Dalit women, the violence perpetrated on them is the most brutal. As much as one may slam media houses for mentioning the caste factor in rape and murder cases, there is no doubt that it plays a major role in violence against these women.  For Dalit women, violence is almost always associated with their caste positions, and also depends on how they behave within the system. For example, their resistance to or dissent towards the caste structure often triggers the violence. This violence is not just meant to control women, but also to carefully maintain the caste structure. read more here @  The Logical Indian see more here @ International Dalit Solidarity Network
Post a Comment
Read more

From  Himalayan Times :  Police administration has intensified the campaign to demolish chhau sheds where women are banished during their periods, ancient social tradition still in practice, in the far-western region. Even though chief at District Police Office, Bajura, Tanka Prasad Bhattarai tried to convince a local woman sitting inside one of such sheds about banning of the traditional practice by the government, the woman declined to come out. “We are compelled to sit outside as the society would not tolerate women sitting inside the house during mensuration,” Kunwar said, adding, “we do not have any alternative other than to sit inside the house as police have also warned to take action against those practising the tradition.” The campaign was launched with urgency in far-western districts of the country after a woman died inside a chhau shed in Achham district in early December. Numerous women have lost their lives in the region over the years while staying inside menstrual huts,
Post a Comment
Read more

Scythian horsewomen and the myth of the Amazons 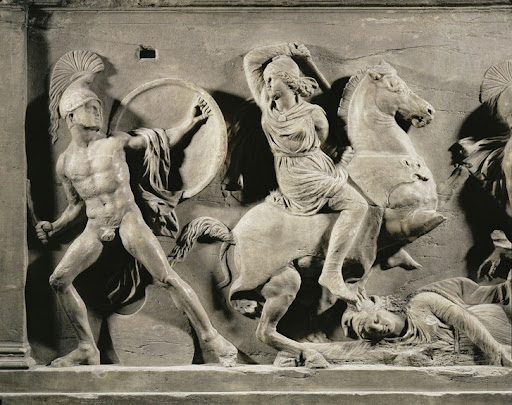 From  The Wild Hunt :  In December 2019, the Russian Academy of Sciences reported finding the skeletal remains of four horsewomen. The burial site contained contained weapons and only female skeletons. Archaeologists have dated the grave to between 400 and 301 B.C.E. and linked it to Scythian culture. Previously, archaeologists had found the burials of 11 young horsewomen along the Don River valley. This finding marks the first known burial of women of different ages in the same grave. Tomb robbers had broken into the kurgan in either the 3rd or 2nd Century B.C.E. These ancient grave robbers only damaged the northern half of the kurgan. The disturbed half of the kurgan contained the skeletal remains of a woman aged between 20 and 25 as well as that of a young woman aged 12 or 13. The grave goods in this half of the kurgan included animal bones, iron hooks, iron knives, 30 iron arrowheads, fragments of ceramics, and harnesses for horses. read more here @ The Wild Hunt
Post a Comment
Read more

From  HISTORY :  Draped in lush trees and surrounded by stately buildings, Buenos Aires’ Plaza de Mayo might look like a place to check out monuments or stop for a relaxing rest. But each Thursday, one of Argentina’s most famous public squares fills with women wearing white scarves and holding signs covered with names. They are the Mothers and Grandmothers of the Plaza de Mayo, and they are there to bring attention to something that threw their lives into tragedy and chaos during the 1970s: the kidnapping of their children and grandchildren by Argentina’s brutal military dictatorship. For decades, the women have been advocating for answers about what happened to their loved ones. It’s a question shared by the families of up to 30,000 people “disappeared” by the state during Argentina’s “Dirty War,” a period during which the country’s military dictatorship turned against its own people. The Dirty War has been over since the military junta gave up power and agreed to democratic elections
Post a Comment
Read more

From  ABC News (Australian Broadcasting Corporation) :  A new online resource gives an insight into some of Melbourne's most notorious female criminals, and others jailed for offences that no longer exist. The prison records of more than 7,000 Victorian women incarcerated between 1855 and 1934 are available to view online for the first time, thanks to the State Archives. The Public Record Office Victoria (PROV) cleaned and digitised the records, which were then indexed by volunteers over an 18-month period. PROV's Daniel Wilksch said it took careful work by the archive's conservators to prepare the records for digitisation, because they had become wet at some point and were affected by mould. The newly digitised female prison registers are available to view online on the PROV website . read more here @  ABC News (Australian Broadcasting Corporation)
Post a Comment
Read more

When women strike back, courts can't always see their history of abuse

From  ABC News (Australian Broadcasting Corporation) :  When Anita broke into her former partner's home, she thought he would snatch her knife and use it against her. She can't explain what happened next. She said she can't explain why instead she lunged at his screaming partner, stabbing her in the chest and puncturing her lung, before attacking him. But as he sentenced her to six years and three months in jail earlier this year, Judge John Smallwood recounted a different story entirely. "The fact that you have made threats essentially to kill both your husband and [his partner] previously," he said, "indicates that, in my view, you went there to hurt them." "I am not going to buy into the family history leading up to all this," he told Bloom, who pleaded guilty in the County Court to four charges: two counts of intentionally causing injury, making a threat to kill, and aggravated burglary. The previous day, Bloom had been charged with assault
Post a Comment
Read more

Indian women are 'creating terror' abroad for their runaway husbands

From  IOL News :  In a pink-walled room of a government office at the foot of the Himalayas, Indian women spend their days cancelling the passports of runaway husbands. Midday on a Monday, the father of a woman who married a merchant marine is explaining how the husband lied about being single and failed to disclose the fact that he had a child and a warrant for his arrest. The case, says worker Amritpal Kaur, should qualify for immediate impoundment of the man's passport. Kaur isn't your usual Indian bureaucrat. She isn't a government employee at all. She and the other women who work in the passport office are abandoned wives, volunteering their hours at the office to help women like them. Sibash Kabiraj, regional passport chief in the city of Chandigarh, says it all began when the wives started coming to him and pleading for help. A lifelong civil servant with a taste for the fine print, Kabiraj realized Indian law would allow him to suspend – and even cancel – the passpo
Post a Comment
Read more

From  Asia Times :  Taiwan has forged a reputation as Asia’s most progressive democracy and it boasts a higher proportion of women in parliament than anywhere else in the region – yet misogynistic insults have littered its presidential race. The campaign for the January 11 polls has exposed an undercurrent where female politicians face a gauntlet of personal abuse and jibes that their male counterparts rarely suffer. The island’s most prominent female politician is President Tsai Ing-wen, 63, who is seeking a second term. She has once again faced insults based on her gender, much of it focused on the fact she is not married and does not have children. read more here @ Asia Times
Post a Comment
Read more

From  Archaeology @ Haaretz :  Female Scythian warriors have been found before, but this is the first time multiple generations were found buried together – with a golden headdress and other grave goods that thieves missed. For the first time, archaeologists found a magnificent headdress in situ, still wrapped around the skull of its possessor, archaeologist Valerii Guliaev and colleagues explain this week in the journal of the Akson Russian Science Communication Association . Also a first, the researchers’ study suggests that although the “Amazons” were buried together, they belonged to three different generations. The archaeologists also found dozens of iron arrowheads, as well as iron knives and animal bones. read more here @ Archaeology @ Haaretz
Post a Comment
Read more
More posts