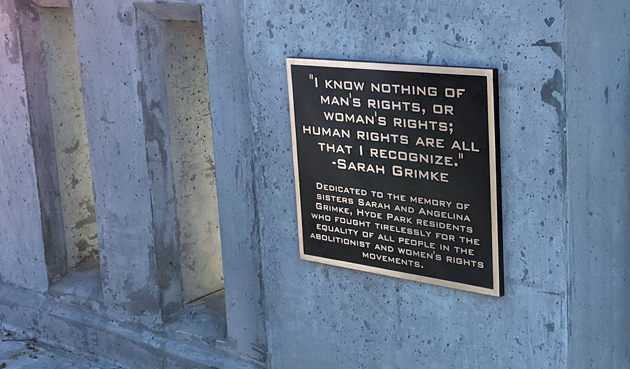 City officials and local historians and residents gathered at the former Dana Avenue Bridge in Hyde Park this morning to officially rename it as the Grimke Sisters Bridge in honor of two 19th-century sisters who fought for both the abolition of slavery and for women's rights to vote - and who on March 7, 1870 led a march of women to Hyde Park Town Hall to vote in the town elections, the first time women voted in the US - although the town then discarded their ballots.
The sisters, children of a prominent South Carolina slave owner, fought for ideals "that were dangerously radical, even among reformers," such as that all people are equal and deserve the same rights as white men, Catherine Allgor, president of the Massachusetts Historical Society, said. At a time when "racism ran deep in the United States," even among white reformers, "they were attacked on all sides, they were denounced in pulpits all up and down the East Coast," she said.
She added that Sarah Grimke specified she was not asking for special treatment by men. "All I ask from our brethren is that they take our feet off our necks," words later made famous by then lawyer Ruth Bader Ginsburg.
read more here @ Universal Hub