Gaddafi's special team of female bodyguards: A dark story of rape and violence

November 16, 2019
From Face2Face Africa:
At the peak of his power, Gaddafi was unavoidable. Perhaps, what he lacked in words was expressed in the mixed bag of atrocities he masterminded as well as all the good he did for the Libyan people.
The man was what he did not say but showed. And one of the things he showed – a thing that made him the “one to see” on the international scene – was his team of exceptionally trained and dramatically named Revolutionary Nuns.
The group was formed in the early 1980s, after Gaddafi's official resignation as Libyan head of state in favour of the title of "Brotherly Leader and Guide of the First of September Great Revolution of the Great Socialist People's Libyan Arab Jamahiriya".  According to Joseph T. Stanik, Gaddafi reportedly employed a cadre of female bodyguards because he believed that an Arab gunman would have difficulty firing at women. However, it has also been submitted by other authors that Gaddafi's female bodyguards were, in reality, just an aspect of the dictator's well-known eccentric showmanship and his fondness of surrounding himself with young women. Gaddafi would usually travel with 15 of his Amazonian Guards assigned to security or housekeeping. 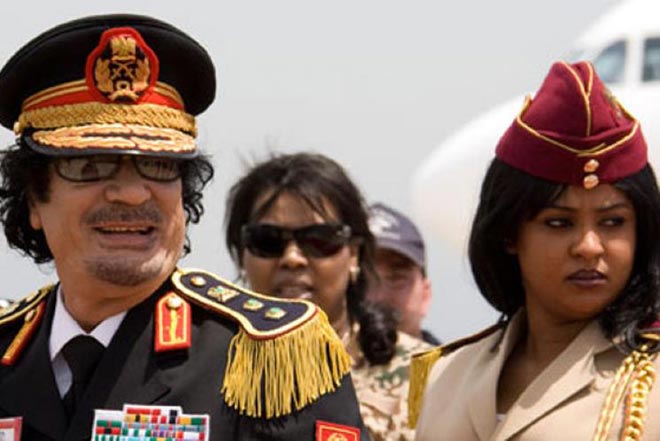 It should come as very little surprise that in selecting who gets to put their life on the line for the president, some moral and spiritual significance is attached to a woman who has never had sex.  In recent times, however, it has been reported that becoming a member of the guard was not optional for some women. They are pried away from their families at the threat of dire consequences should they refuse.
read more here @ Face2Face Africa
see also:
Gaddafi's Harem: The Story of a Young Woman and the Abuses of Power in Libya by Annick Cojean