How the society controls a woman’s sexual, matrimonial and reproductive choices 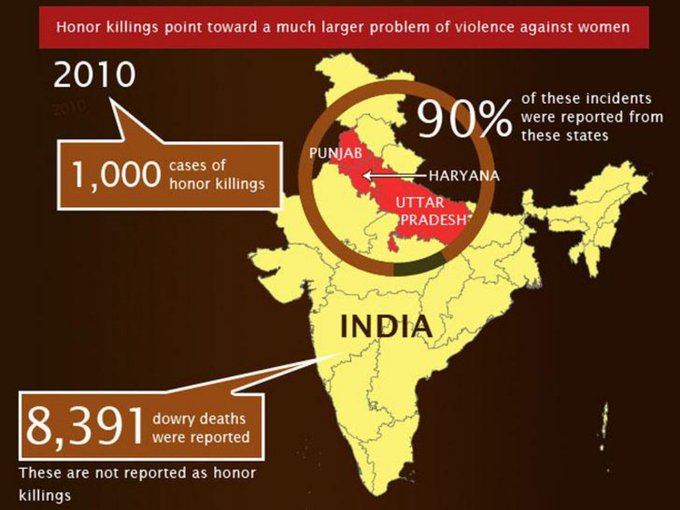 Honour Killings .... Each case is telling of the severe violence and hate that emanates when a woman exercises her choice in marriage or relationship. While some of these cases had grabbed national media attention, some were just reported on a corner of the newspaper and forgotten the next day. But the fact remains that these crimes in the name of honour are rampant in India and not much efforts have been made to tackle the menace.
It wasn’t until 2014 that the National Crime Records Bureau (NCRB) started collecting separate data on the crime. As per the 2014 NCRB report, a total of 28 cases were reported where honour was the motive of the murder. This number saw a shocking 792% jump to 251 cases in the 2015 NCRB report and then fell to 77 cases in the 2016 report. UP topped the list of states with the highest honour killings in the 2016 report with nearly 70% of all the murders in the state caused with honour as the motive.
Evidently, these data are not fully reliable due to the fact that these cases are tabooed and people don’t talk about them openly. A sudden jump in 2015 indicates a pro-active data collection but a sudden fall next year indicates a probable awareness that such crimes would no longer be taken lightly leading to aggressive attempts to hush them up. The NCRB has not published any data after 2016 — in absence of which, fully understanding the nature of these crimes is not possible.
A patriarchal and patrilineal society’s very survival depends upon controlling women’s sexual, matrimonial and reproductive choices because it is through a woman’s womb that identities are produced and reproduced, and controls over properties are maintained.
read more here @ Daily O