Ancient, Pregnant Native American Woman Who Was Shot and Killed by Arrows Discovered by Archaeologists

May 17, 2019
From Newsweek:
An archaeologist in Pennsylvania is starting to unravel the mysterious burial of an ancient, pregnant Native American woman who appears to have met a violent end.
Bioarchaeologist Robyn Wakefield-Murphy found four arrowheads in the torso of a woman who hailed from Pennsylvania's Monongahela archaeological tradition. Wakefield-Murphy described her research in a poster at a meeting of the American Association of Physical Anthropologists in March.
The young woman’s bones were originally uncovered in the 1950s excavation of a site in southwestern Pennsylvania.
The Monongahela, who lived from about 1050 C.E. to 1635 C.E., according to Ohio History Central, built relatively large villages featuring dome-shaped houses. They cultivated crops like maize and would have traded with other Native American groups. Beyond western Pennsylvania, the Monongahela tradition spread to parts of eastern Ohio, western Maryland and West Virginia. The group is named for the Monongahela River that cuts through West Virginia and southwestern Pennsylvania. 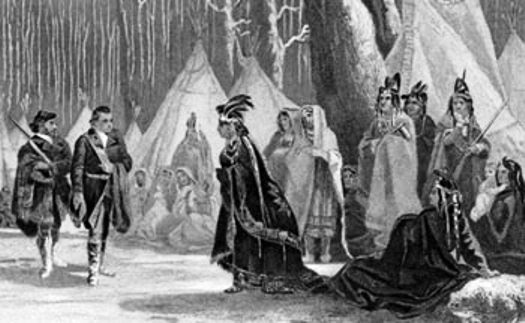