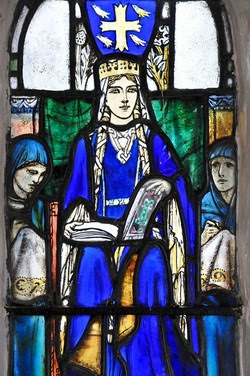 Part of St Margaret’s shoulder bone has been removed from its reliquary by archaeologists seeking to find out more about the life of one of Scotland’s most venerated figures.
The experts will use 3D scanning technology to try to discover more about the 11th century Queen of Scotland’s lifestyle, as well as producing an exact replica which people can hold without fear of breaking an ancient artefact. St Margaret, known as the Pearl of Scotland, led a pious lifestyle and gave much help to the poor, as well as introducing refinements to the country, such as the first use of knives and forks. Now, Lauren Gill from the University of Glasgow and Martin Lane from Cardiff Metropolitan University have had the opportunity to begin researching the holy relic which is kept in an ornate reliquary at St Margaret’s RC Memorial Church in Dunfermline.
After being made a saint by Pope Innocent IV, a shrine was built at Dunfermline where she laid intact until the 16th century when Mary, Queen of Scots asked for her head to be sent to her, to bring her help as she gave birth to her son who would become James VI. Her head was then taken to a Jesuit College in Douai, France, but was never seen again after the French Revolution. As the Reformation threatened to destroy Catholic churches and abbeys the rest of her body had been secreted away in the 16th century, ultimately being taken to Escorial Monastery by Philip II of Spain.
read more here
@ Catholic Online
@ Wikipedia
@ Franciscan Media