March 10, 2019
From Phys Org News:
Rescue archaeology work conducted in the city centre of Yaroslavl prior to installing a new sewer system has turned up an ancient leaden seal from the turn of the 13th century. It once belonged to the spouse of Vladimir Grand-Prince Constantine Vsevolovodich and the mother of the first Grand-Prince of Yaroslavl (Vasilij Vsevolodovich, Duke Of Yaroslavl). Thanks to this find, we finally know the name of the Grand-Duchess—her name was Maria (or quite possibly: Marina Olgovna Princess Of Kursk, 1211-1279).
"In Ancient Rus, everyone in a position of authority—Grand-Princes and Princesses, and the upper ranks of the clergy—had their own seal, which was affixed to all official documents and decrees. We have several thousand such seals from the pre-Mongolian era—but to find one with a female owner is very remarkable indeed. Scientists are only aware of a few dozen examples," said Dr. Pyotr Gaidukov, Deputy director of the Institute of Archaeology.
Dr. Gaidukov is a leading authority on stamps and seals of Ancient Rus, and is responsible for the attribution of the latest find. 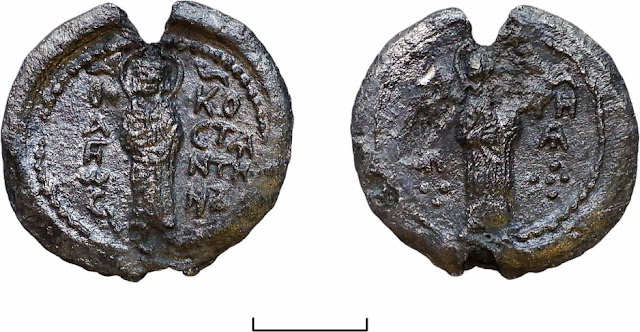 The seal was found in Yaroslavl during preliminary work for putting through a new sewerage system to the Metropolitan bishop Chambers (Mitropolichy Palaty)—the oldest structure in the city. Yaroslavl's city centre has only recently marked its thousandth anniversary—it is a Federal-level Heritage Site that also falls under UNESCO Heritage Protection.
This special status means that any building work in the centre of the city must first undergo archaeological inspection.
Read more
@ Phys Org News
@ Wikipedia - Principality of Yaroslavl