March 10, 2019
From The Things dot com:
NASA has officially confirmed to CNN that the very first all-female spacewalk in history will take place at the International Space Station on March 29 during Women's History Month. 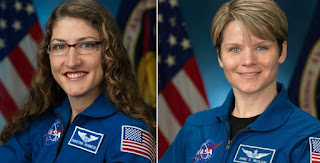 The team will be comprised of NASA astronauts Anne McClain and Christine Koch, who will carry out the spacewalk as part of Expedition 59. Their support on the ground in Houston, Texas, will be Kristen Facciol, a Canadian Space Agency flight controller.
In the official email statement to CNN, she continued, "It is the second in a series of three planned spacewalks. Anne also will join Nick Hague for the March 22 spacewalk. And, of course, assignments and schedules could always change."
It’s not just the astronauts and ground control who are women, either. Schierholz confirmed: "In addition to the two female spacewalkers, the Lead Flight Director is Mary Lawrence, and Jackie Kagey (also a woman), is the lead EVA (spacewalk) flight controller."
read more here @ The Things dot com